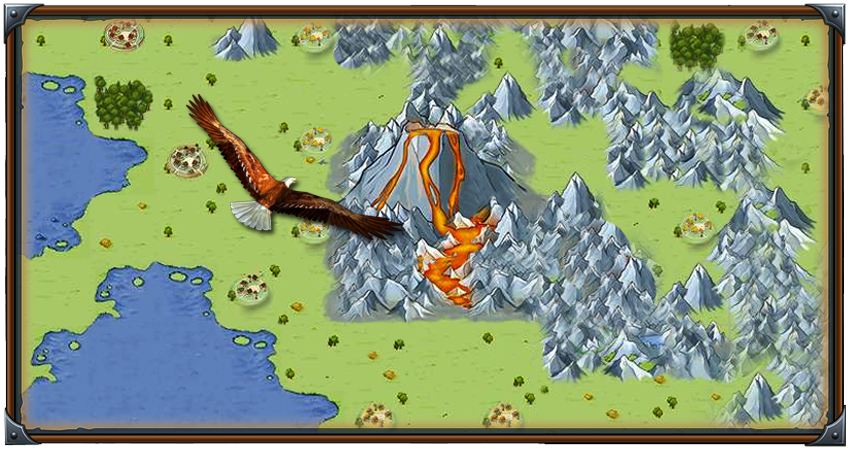 You probably wonder why I haven't written to you for so long after my last dispatch about the First Craftsman's hideout I found. It's only now that I have courage to tell you about the terrible thing that happened there.

I lost my only companion who was with me during the whole journey!

Nenet is no longer with me.

In contrast, the boy who I found in the hut, silently follows me wherever I go. It looks like he lost his path just as we did, so I don't mind. I didn't want to frighten him with my natural Natar appearance, so I put on my Gaul clothes and tried to look like a Gaul pathfinder. It had the opposite effect. If the boy previously was only scared, he is now absolutely terrified. I bet his first thought was about how many of us are here, disguised as normal people of these lands.

How did I lose Nenet? I examined the volcano in Syracusae and, for the first time during my rather long journey, I felt a connection to that place. It reminded me of the surroundings of our beautiful capital. Nenet was worrying all the way up to the volcano crater – he didn't like the columns of hot air released up there. There was a good reason for that. When we were close to the top, the volcano suddenly ejected cinders, and a huge ash cloud engulfed us. I heard Nenet's anguished cry and saw how he disappeared in the thick cloud, but I couldn't help him. Me and the Gaul boy ran away down the mountain without looking where exactly we were going, in fits of coughing and eyes full of tears. Only once I was at the foot of the mountain, I realized that I could not see Nenet. And worse, I didn't feel his presence around me.

"I know of a region with an oracle nearby." His voice was still trembling: "People go there when they're looking for the answers to difficult questions. We can ask the Oracle where your friend has gone. Let's go there. I know the way."

Since I had no better options, I followed him.

How long would it take for the heroes to travel from the volcano in Syracusae (21|−84) to the region of Delphi (67|−80) at double speed? They are traveling without a tournament square and are disguised as pathfinders. 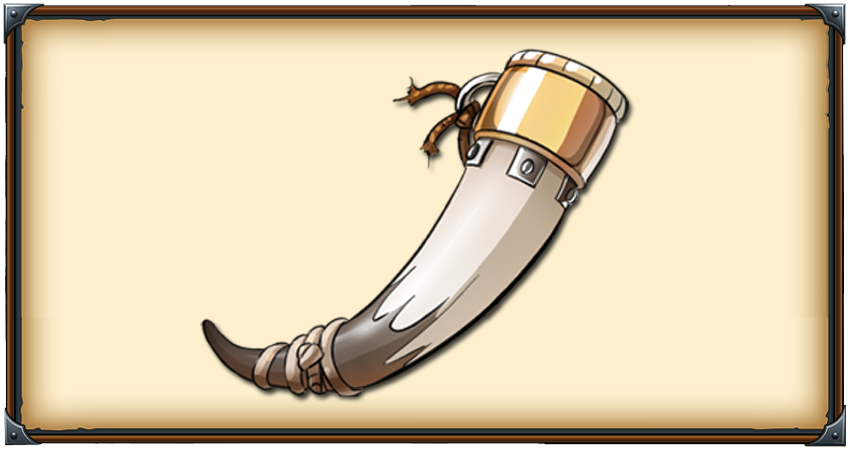 To His Imperial Majesty

We arrived in the region of Delphi quite fast, given the incredible speed with which we are now able to travel. The lands have also changed since the last visit. The soil is more fertile now; it yields more crop and other resources. People are able to build villages faster, merchants' carts travel at an impressive speed and can carry double the resources. In fact, almost everything has been doubled since my previous travels through these lands.

We visited the oracle. The middle-aged woman with aristocratic features, the famous Pythia, seemed to know why we had come here.

"I will tell you the answer to the question you have. Yet, you need to prove that you deserve an answer," she said in a low resonant voice. "First, solve my quest.

Here are seven horns numbered from one to seven.

Arrange them in such a way that the sum of the numbers along all the lines equals 12. Then I will tell you the fate of your friend."

She gave me a piercing look and I knew for sure that she recognized who I am. 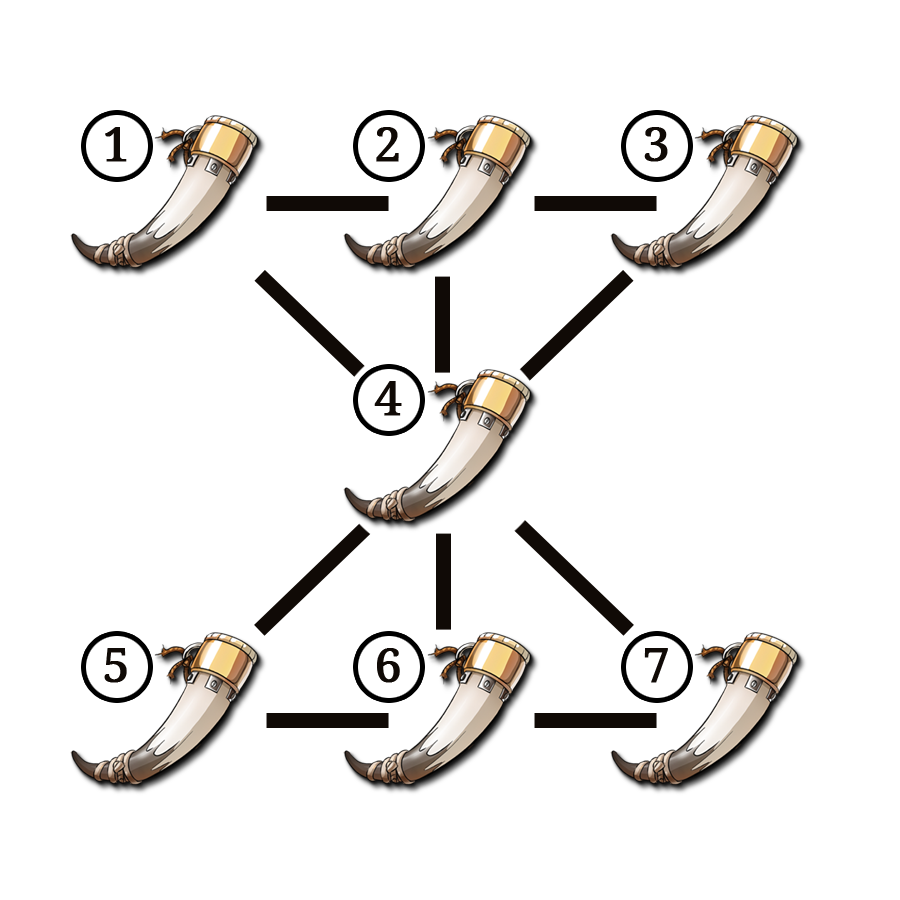 Chapter 3 - My journey is over 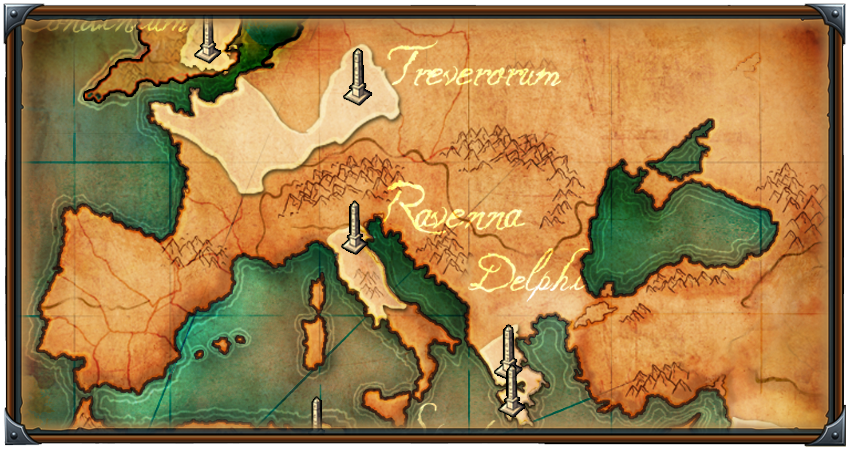 Pythia told me where Nenet was. He was in the last trap of the Craftsman. When the volcano ejected the ash cloud, the inner gates opened and Nenet was thrown from one volcano to another in a matter of seconds. That's why he lost track of where we were.

My Emperor, I was too worried about Nenet's disappearance and neglected my duties to inform you about my findings. Now I need to report my latest discovery.

Visiting Delphi helped me to solve one last mystery about those lands. While traveling here and there around the scattered map, I noticed that some regions are way more populated than others. At first, I thought that was due to the resources they offered or perhaps the special abilities associated with these lands. After traveling to Delphi, the region turned out not to provide any special abilities at all and yet it still had lots of villages all over the place. I recall that they hadn't even heard about our greatest buildings!

Well, I finally found the answer to this mystery. It's not Wonders of the World that define who rules in these lands, but instead those who take control over the regions. People gather in alliances led by the most cunning masterminds to fight for supremacy. Many battles happen here every day as the people wrest for control over the regions. They came up with victory points to give value to each region. I decided to stay here and, now equipped with this knowledge, I'll observe this battle through to the end.

When I was really close to the volcano in Brundisium, I noticed a familiar silhouette in the sky and heard a screech of joy. I lost one companion, but found two. My journey was over.

The winner in Path to Pandora is defined by the victory points that alliances earn on a daily basis. How many points in total can the world possibly produce each day if all regions are unlocked and controlled by an alliance?