If someone would ask me to define a difficult situation, my first thought would be: You are in a cart with 2 hostile mercenaries heading to you have no idea where, your head is in the bag that leaves you not a lot of air to breathe, and you are tied up so well, that you cannot move at all.

I got angry with myself. Somehow, when I found out how to get into the palace, what to do with the scroll that I had found in the basement and, in general, how to spend my life, I didn't expect much of an early failure. Everything felt like a great adventure, one of those that people tell about my famous great-grandfather, a caravan driver and a healer, Mark Atilius. In those stories he always found ways to sort out everything. Even his journey into the Egyptian pyramids – which I now looked at from a different perspective – sounded like a great nice walk, his best, in retrospect. Who cares about death traps if you know that you get out of those safe and sound?

And yet, here I am, in a very difficult situation and I don’t see many caravan drivers around who are ready to rescue me.

- He seems to be alive – the sudden snap voice of a Hun made me shiver and it revealed to my captors that I am not only alive, but also conscious and listening. The bag was taken off my head and I suddenly saw a Hun looking at me.

- It’s risky to keep him – replied the Egyptian. – I am curious to know what he was doing at the palace, and which alliance he spies for, but we have to deal with him right here before we get caught ourselves.

- Our people say the best enemy spy is a dead enemy spy – a nasty smirk of a Hun left me no hope. He took his curved knife out of the scabbard.

I felt a sudden pain in my chest and died. This is how I ingloriously lost my ultimate battle. 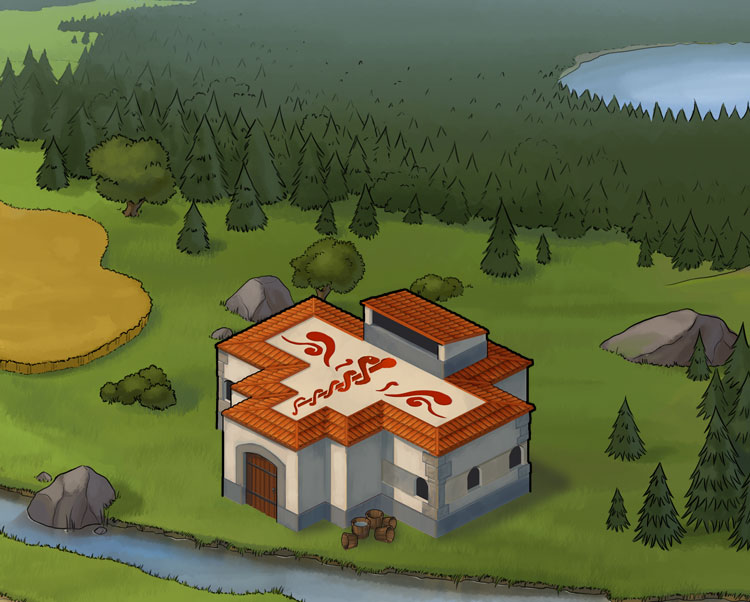 Being a skeptical person my whole not too long life, I actually didn't believe in the other world. Surprisingly it does exist! The clean walls, bright light from the big window and a very comfortable bed served as clear evidence of that. The place smelled of herbs and some unknown minerals. A beautiful middle-aged goddess came into my room with some hot beverage in a clay mug and smiled. It was the most heart-warming smile that I had ever seen.

- I'll tell the others you've woken up, - she gave me the drink. – For quite some time we were afraid we wouldn't be able to heal you.

- Heal me? – Only now did I feel the tight bandage around my left hand and chest and realized that this place was real. – So, I am not dead and this is not eternity?

- No, though you did everything to get there. - the goddess smiled again – Yet, you’re a lucky person. Whoever did that to you obviously didn't know what our sign means. They dropped your wounded body right at the hospital's back door. And we have the most famous healer in the empire here with us, which is no wonder as he was taught medicine by the Master Mark Atilius himself.

I felt warmth in my heart. Even a century later my great-grandfather hadn't lost his ability to sort out difficult situations.

In a certain medical school there were 2 healers, one taught about healing with herbs, the other how minerals can provide the needed cure. Each one had a certain number of students. One day a student from of the 'herb' group decided to join the 'mineral' group and after it happened, both teachers had the exact same number of students. A few weeks later, the same student decided to go back to his previous teacher, and now things changed back to the way they were before. After that, another 'mineral' student decided to join the 'herb' classes, and at that point the first group became twice as big as the second group. How many students were learning at the medical school?

The medical school had 12 students.

At the beginning there were 7 students in the "healing with herbs" class and 5 studends in the "how minerals can provide the needed cure" class.