Whoever wrote that note about doors was a bloody joker! If this is the safe path, then I am the Roman Emperor! Arghhh!

My old father had always told me that dying of old age is not part of my life story and that I remind him of my mother’s grandfather, Mark Atilius, from whom – my father believed - I inherited my passion for adventure and ability to end up in risky situations (in fact, he used rather different expressions, but since I am planning to show those notes to my little sister, I wouldn't dare to write them here). And for quite some time, when I was scared to find some broken bones, I was totally agreeing with him!

Alright, the good news is – my bones seem to be OK, unlike my self-esteem as well as my knees and palms. I found myself on the hairbreadth of disaster. Only a few centimeters to the left and no one would ever find me here. Let alone alive.

Now, a few words about the place where I was in. It’s a dark, rather big and deadly cold basement and the only light here was through the small window above the hole 3 meters above, through which I fell in here. The door was closed and I somehow was sure that the bookshelf is in its usual place and that means no one would even look for me here. If I had fallen just a bit further from the wall I would have ended up in a ditch that seemed quite deep. At least I couldn't see the ground. I found a small stone and dropped it into abyss. A couple of seconds felt like an eternity, then I heard a weak sound. That meant the way down was not going to be an option.

Nearby there were 2 long logs in which I recognized something that – probably a hundred years ago – used to be a ladder. Unfortunately, the rungs were broken, and even if I somehow climbed up there using one of those, I wouldn't be able to open the door balancing on that stilt. So, the way up is out of the question, too.

I sat on the edge of the ditch and peered into the darkness. As my eyes got used to the light, I saw something that looked like the door. Ha! There is another way out! All I need to find out is how I can get there alive.

The ditch around the door is 3 meters wide. Both logs are exactly the same length. Help the hero to get to the exit door. 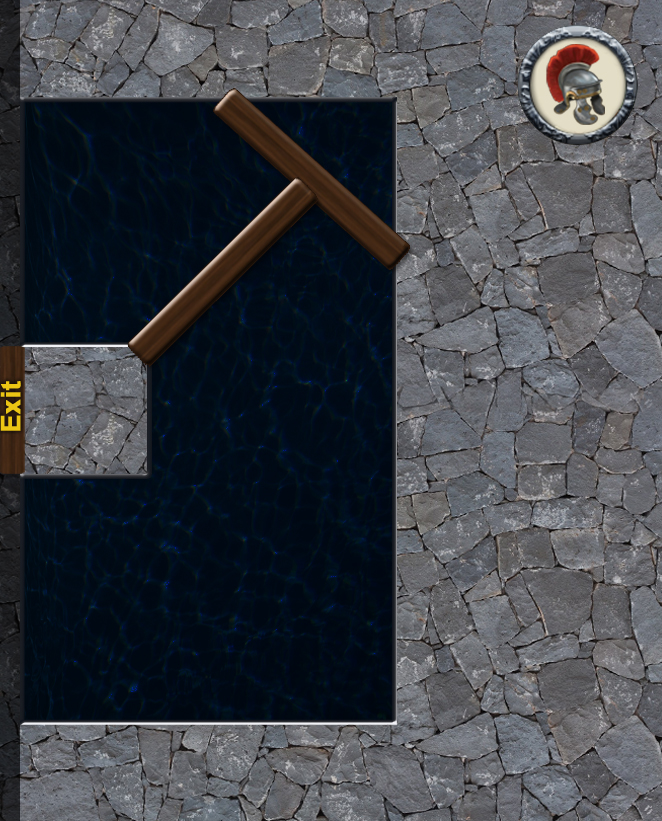